With increasing numbers of Leach’s Petrels and other seabirds being reported flying up the Severn yesterday, and strong winds overnight, it seemed like a good idea to get out and check a few local sites today. So I was out before first light this morning (I know, it's not difficult at this time of year!), and news of Leach’s at both Grafham and Staines this morning was initially encouraging. But despite thoroughly grilling Swithland, Cropston, Watermead and most of Rutland Water, I couldn’t even rustle up a friggin’ Kittiwake, let alone a frigatebird (or a Fregatta petrel). Oh well, at least I tried.
Highlight of the day was 'Harold' (well it's as good a name as any for a Whooper Swan) the ridiculously tame (but BTO ringed) Whooper Swan, still coming to bread with the Mutes at Watermead: 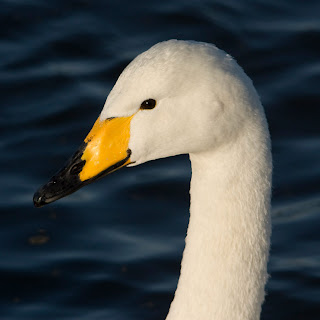 Posted by The Leicester Llama at 20:39 2 comments:

Another county tick at Cossington Meadows heard about just too late to be able to get there before dusk! This time Leicestershire’s third (if accepted) Richard’s Pipit, which apparently flew over and then landed in Swan Meadow some time this afternoon. Both the previous records were one day birds – the first, at Cropston Reservoir in 1990, was only seen by the finder (Steve Close); the second (Bardon Hill, October 2006) was seen by a few people, but not me as I was in Shetland at the time. But to be positive, it’s getting quite late for Richard’s so hopefully this one might be thinking about wintering, or at least hanging around for a while. Or perhaps it’s a Blyth’s. And even if it isn’t a Blyth’s I’m sure someone will try and turn it into one if it’s seen again.

However, I shan't be there at first light tomorrow as I have to get some background reference photos for a couple of commissions I'm working on, and tomorrow looks like being the only day of decent light this week. Plus I've got a cold at the moment, and don't really fancy being anywhere other than in bed at first light. Which brings me neatly to:

Quote of the day from Morrissey, explaining why he has had to cancel several gigs recently: “I have endured a titanic struggle with an intolerable virus”. A pronouncement which reminded me of the classic Viz headline: Morrissey - still a twat!

I was at Eyebrook Res this afternoon, on the Leics side, looking over the ‘unlawfully trimmed’ section of the hedge*, when all the Golden Plovers, Lapwings and Dunlin suddenly got up. My first thought was naturally ‘Eleonora’s Falcon!’, and I scanned the sky excitedly, but no, it was just a pair of posh middle-aged twats strolling along with their brightly coloured jackets and stupid 'walking poles', inside the reservoir grounds.

As they approached I politely (honestly!) asked them if it was really necessary to walk on that side of the hedge when there was a perfectly good road to walk on that didn’t involve trespassing on a nature reserve or scaring all the birds away. And their excuse? ‘It’s better for our legs to walk on this side rather than on the road.’

After a further exchange of words, which I’m afraid was rather less polite on my part, I left and went to Rutland Water instead.

At Rutland Water I saw a Black-necked Grebe, 5 Common Scoters, 5 Whooper Swans and 7 Red-crested Pochards, all in the North Arm. Couldn’t find the Red-throated Diver(s) though, despite much searching.

* - ref the ongoing battle of wills between English Naturists, or whatever they’ve decided to call themselves this week, and local birders, who, whilst fully understanding the need to conserve hedgerows, would not unreasonably like to be able to see at least some of the fucking birds at Eyebrook!

The Men Who Stare at Falcons

There was another report today of a possible/probable/putative Eleonora’s Falcon in ‘Area 51’ (also known as Dreamland). This was at least the eighth report in the area since the middle of September. At least three different birds have been involved – a dark morph, a pale morph and now a juvenile. Just what is going on down there? Is there something we’re not being told?
The Leicester Llama has obtained the following classified document which may shed some light on the matter: 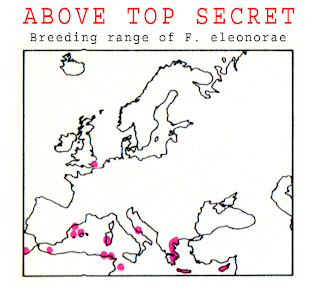 Posted by The Leicester Llama at 19:34 5 comments: 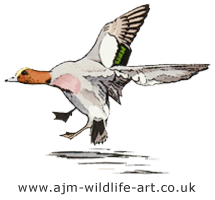